Since 2013 the editorial staff of the Spartacus International Gay Guide has complied the Spartacus Gay Travel Index. In this year, some changes in the evaluation of the Gay Travel Index’ countries have been made to the list, to include the countries which are not listed in the Spartacus International Gay Guide, in order to establish a better comparability. It also aims to minimize distortions for whose countries for which we have received insufficient information and so no evaluation in each of the categories. But we didn’t want the information that we have collected these countries not be withheld and we decided to create a separate list.

The categories have not changed and reflect both the legal provisions as well as the social conditions that homosexuals in the respective countries are confronted with. We have 14 categories ranging from gay-marriage to death penalty for homosexuals. The countries are colour coded with dark green being the most liberal and gay-friendly countries down to red for the most dangerous countries for homosexuals to visit and live in. This list will be updated on a regular basis, allowing trends to be seen–positive as well as negative changes to our gay world.

You can find the explanation of our points system on the last page. Our Gay Travel Index is divided into positive and negative categories. On the left hand side the positive (in green) and on the right the negative attributes (in red). With regard to anti-discrimination laws up to 3 points can be awarded, making a distinction, for example, whether the principle of non-discrimination on grounds of sexual orientation in the constitution or only in a law for a specific area is shown. In the category marriage/partnership up to two points can be awarded, as well as in adoption (So-called step child adoption or/and joint adoption). The strength of the religious influence and general homophobia in society will be assessed with up to -2 points, since the quality of life you can massively restrict homosexual. Also reports of homophobic motivated murders in all countries will be evaluated with -2 points. In some countries homosexuals must fear the death penalty, but we distinguish between whether the death penalty is only set in the law, but does not apply / is not carried out (-1 point) or whether it is actually carried out (-5 points). All other categories will be with /- 1 point.

The constantly changing political influences will be reflected in our updates, which will take place several times per year. 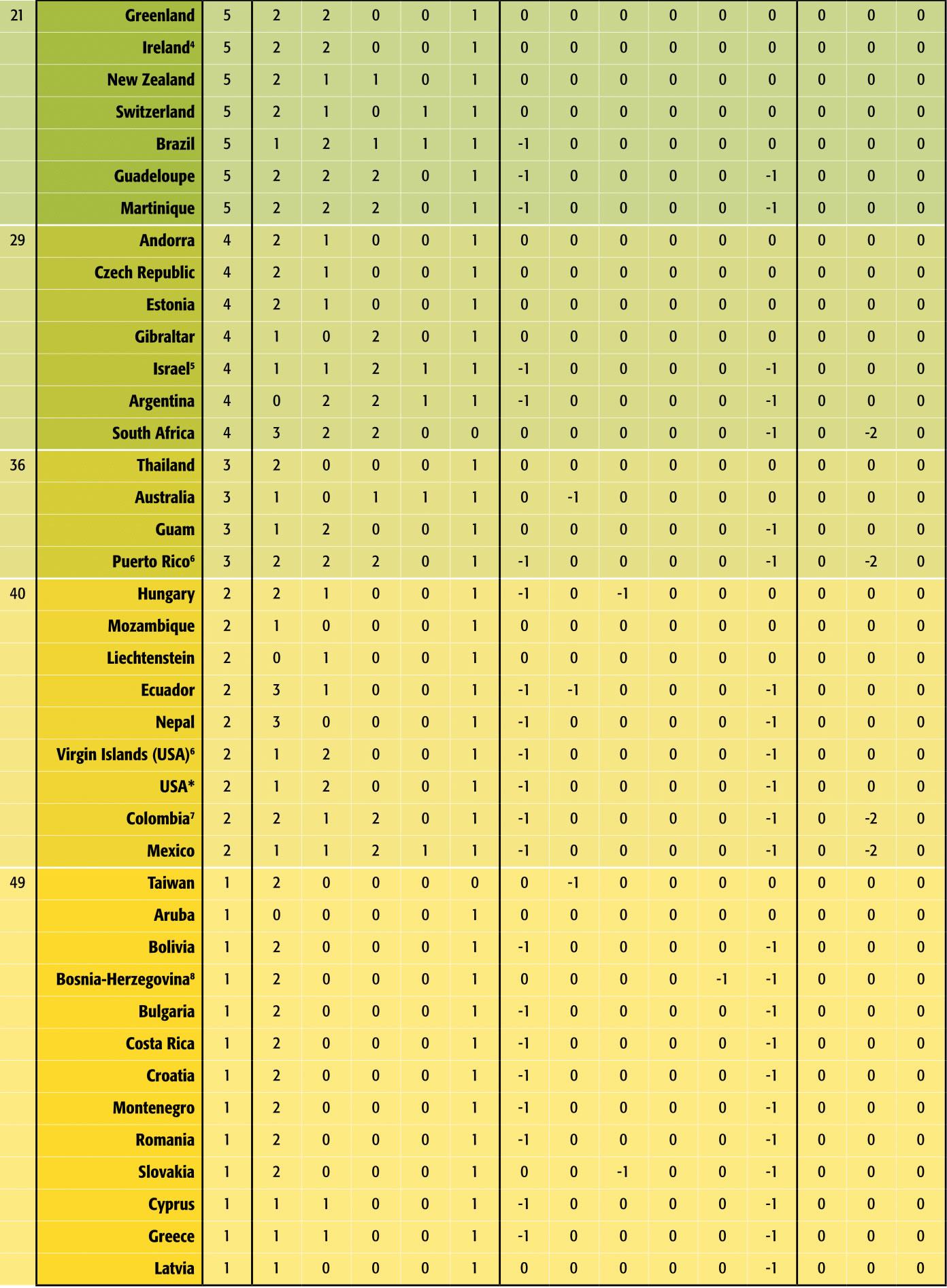 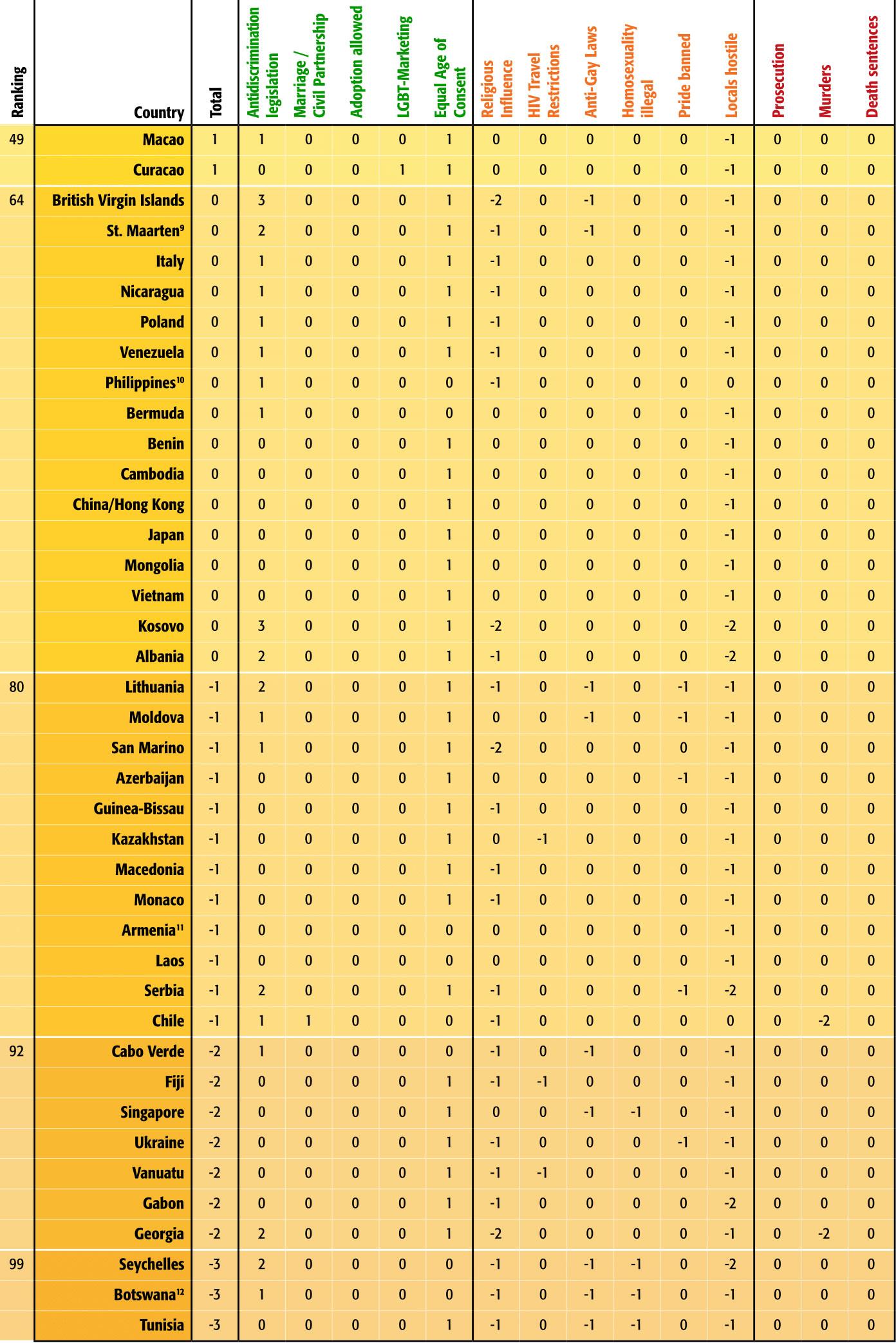 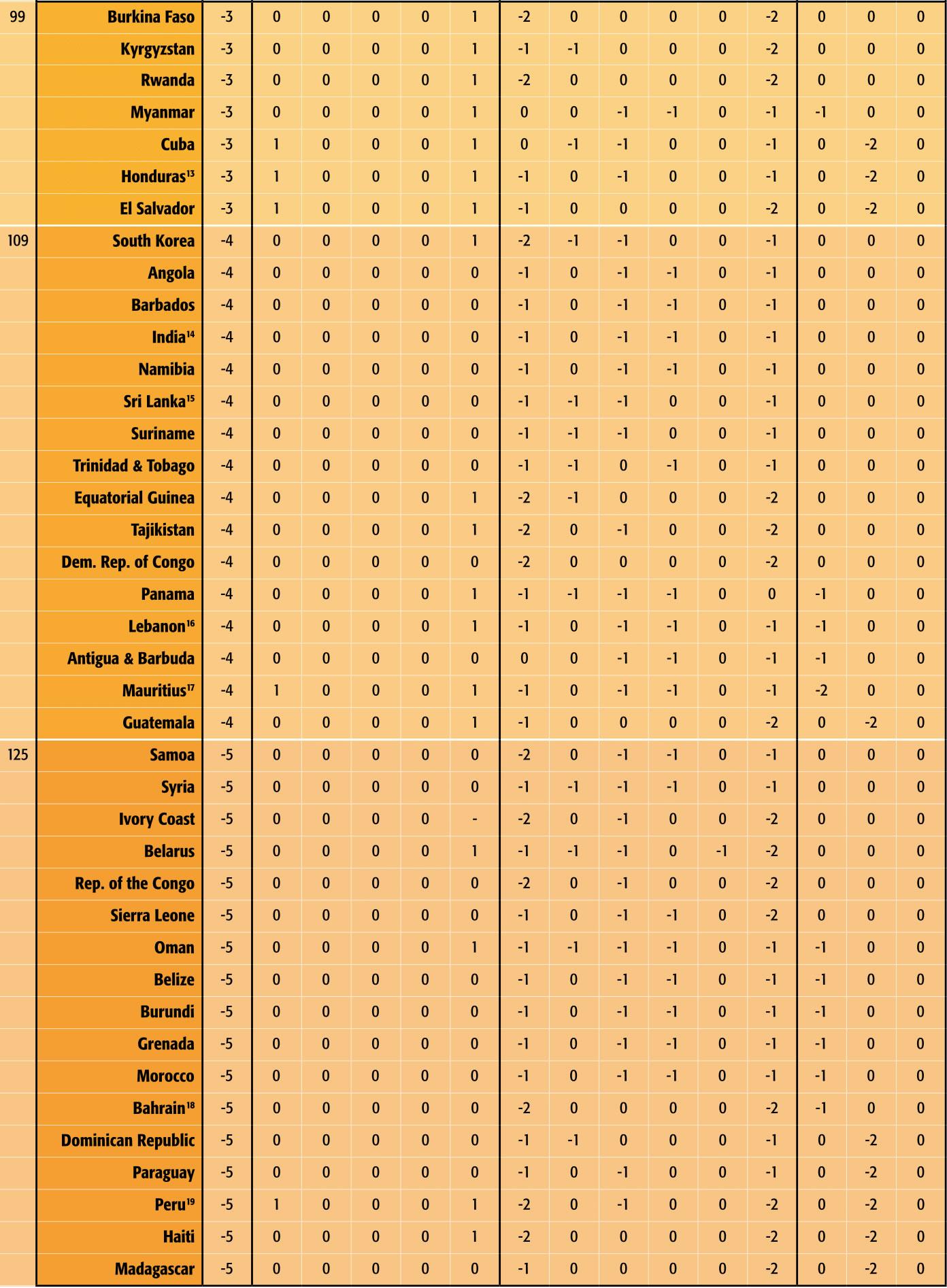 Notes:
1 In Northern Ireland the legal situation for same-sex adoption is unclear.
2 In Canada the adoption laws vary per province. Same-sex-adoption is however possible countrywide.
3 In Germany, due to federal government system, there are varying regulations regarding arrival/ residence HIV. For example in Bavaria someone who is HIV-positive can be denied entry. The Federal Constitutional Court has stipulated in several rendi-tions of judgment that the politicians implement the same rights for gay men and lesbians which apply to heterosexuals.
4 The Employment Equality Act allows religious-run workplaces exemption from its anti-discrimination provisions in order to protect their ethos.
5 In Israel a civil marriage for both homosexual and heterosexual couples is not possible as marriage can only be performed by a Rabbi. This problem does not only apply to gays and lesbians but also hetero-sexuals belonging to different religious affiliations. There are limited anti-discrimination laws (excep-tion: certain religious groups).
6 The Virgin Islands of the USA have the same legal status as Puerto Rico regarding the USA. Here there is also a ban on hate crimes. After the Supreme Court decision pro same sex marriage in the US, there are plans to implement SSM in Puerto Rico too.
7 The legal status of homosexual couples, allowed to register since June 2013, is unclear because pol-iticians are persistently refusing to pass a law that would accord registered gay and lesbian couples the same rights as married heterosexual couples.
8 Bosnia and Herzegovina passed an unclear an-ti-discrimination law in 2009 in which a ban on discrimination against “sexual expression” is men-tioned. There is a reference that “sexual identity” is
www.spartacusworld.com
not meant in this case. It is obvious that an attempt to adhere to the minimum requirements from the EU has been made, in order to be accepted into the EU.
9 As an overseas territory of the Netherlands St. Maarten recognizes same-sex marriages which are performed in the Netherlands. In St. Maarten itself gay marriage is still not possible, but changes can soon follow. There are no adoption laws.
10 There are regional differences in the laws relating to homosexuals. In addition, the local religion is just as crucial, whether a law is implemented or not.
11 From Armenia we received many reports of illegal violence from police against homosexuals.
12 In Botswana is homosexuality practically illegally on the basis of the ban on “unnatural act”, but in the labor law there is still an explicit prohibition of discrimination on grounds of sexual orientation.
13 In Honduras an anti-discrimination law has re-cently been passed, but in practice it is ignored.
14 In December 2013, the Supreme Court set aside a 2009 verdict by the Delhi High Court that had de-criminalized homosexuality. This has turned gay sex into a punishable offence once again and catapulted India back into the legal standpoint of colonial times under the British.
15 At the request of the UNHCR Sri Lanka has an-nounced that discrimination of homosexuals is con-stitutionally forbidden. It was further stressed that the anti-sodomy law is not aimed against homosex-uals, but applies for all to protect public morals.
16 There are reports of a different judicial interpreta-tions of the law on “sex against nature’.
17 In Mauritius, the sodomy law tends to find appli-cation with the heterosexual population. The Equal Opportunities Act protects homosexuals against discrimination at work. It is therefore questionable
whether homosexuality is classified as illegal or not.
18 In Bahrain although the paragraph referring to sodomy was abolished in 1976 from the local legal code, gay men can still be punished with imprison-ment according to the laws regarding “unmoral” behaviour.
19 Consensual homosexual acts in Peru between adults are legal. An exception applies for members of the military and police, who can be prosecuted with a prison sentence ranging from 60 days to 20 years or suspension from duty.
20 In Ghana there is a ban on unnatural sex. The government recognizes in this a clear ban on ho-mosexuality.
21 The Shariah-law in Djibouti is often superior to the constitutional laws, so that it could be expected that homosexuality is punishable.
22 In Nigeria the death penalty only applies for ho-mosexuals according to the Shariah laws and there-fore relates only to Muslims in the north of Nigeria.
23 Police stopped violently the Gay Pride on June 29th, 2015. This can be considered a de facto ban on the Pride.
24 The Vatican City adheres to Italian law, but restric-tions are possible if the ecclesiastical law contradicts Italian law. Therefore there are conflicting opinions that homosexuality is not illegal or just not happily seen, but tolerated.
25 Homosexuality in Iraq is formally legal, but police and military track down homosexuals, and reports of murder and rape exist.
26 Shariah laws applies in Somalia since 2012. There is however contradictory information, since, on the one hand the maximum penalty is up to 3 years in prison, but 2013 a homosexual was stoned to death after a judgment.

Not included in the rating:

2 In Micronesien different laws apply in the individual regions, relating to homosexuals.

3 In Chad and Niger there is only inaccurate information on the prohibition of “unnatural sex” or provisions which are a potential hazard to prevent public immorality. It is not clear, whether this means that homosexuality is meant and neither the Embassy of Chad nor Niger has not replied to our questions on this matter.

4 In the Palestinian territories in the Gaza Strip, homosexuality is illegal in Gaza but

As the legal situation for homosexuals in the different US states is so varied, we have listed each of the 50 states which make up the USA.

On the 26th June 2015 the S upreme Court made a histori-cal judgment. With 5 votes to 4 the Judges decided that the prohibition of marriage for homosexuals is unconstitutional. This means that gays and lesbians in all 50 federal states can enter into matrimony. The Conservatives are now attempt-ing to include new additional articles to be included in the Constitution which would allow each state to agree on the definition of marriage.

1 In 2015 Florida explicitly lifted the adoption ban for homosexuals after the federal judges has classified it as unconstitutional in 2010.

2 In Texas as a result from supreme court ruling from 2003 in the case Lawrence vs Texas the sodomy law was deemed to contradict the constitution of the USA. The sodomy laws are however still found in the code of law in Texas, although no longer enforced.

3 The Mississippi is currently the only state in the United States, where adoption for homosexual couples is not allowed. Neither a joint adoption, nor a stepchild adoption is possible for homosexuals.

Larryalevy
3 years ago.  ·  Larryalevy
The review are waiting to approve.
Review
I thank for the information.